You can check whether an animation is playing with:

Note: you can’t access active animations by id, you must iterate over them. Example for checking if a specific animation is currently playing:

For animations that play in random intervals and they are hidden when not playing you can use Random Loop Pauses. Such animations could be for example cars or birds going from one screen edge to the other. By enabling the relevant option in animation’s properties, a Random Loop Pause between 5 and 20 seconds will be added between each animation play; during this pause the animation won’t be shown. 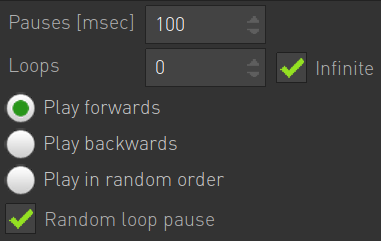 You can control the maximum possible Random Loop Pause with Lua:

Many times we need to have animations that play at random intervals but they have to be visible on screen at all times. E.g. a bird that is standing on a branch and flaps its wings at random intervals. For this we just need to add some code in the first two frames of the animation by adding the relevant ‘Execute Script’ action part.

Tip: to make things 100% random every time a game is started, it is advisable to run this code at every game start action:

Sometimes we need to have an animation play forward and then backwards (or the opposite). You just need to set the first and last frame of the animation as follows:

Get the index of the currently active frame

Get the amount of frames of an animation

For cursor animations you need to define if you need the active or inactive cursor as follows:

Still stuck? How can we help?

How can we help?